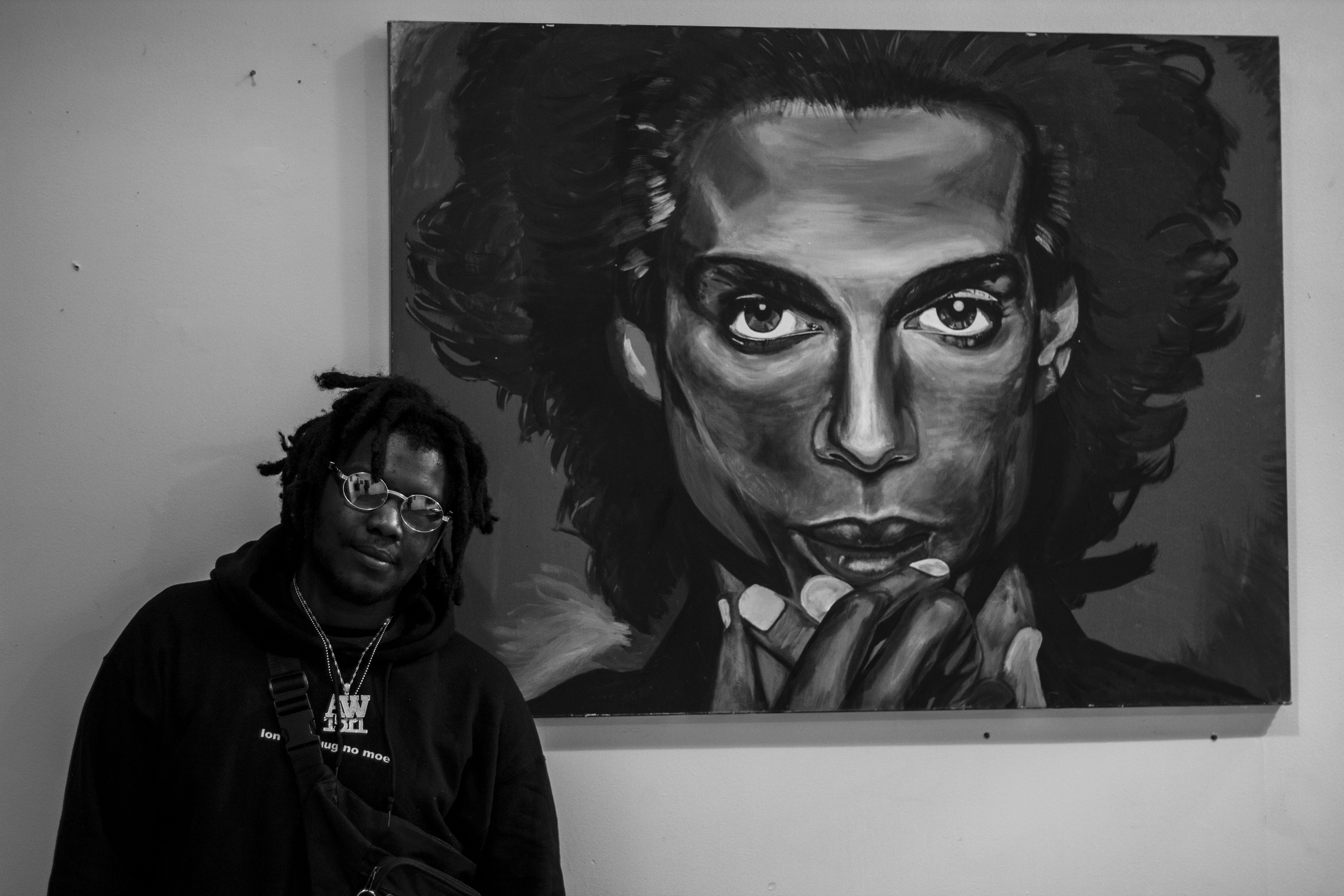 I never know what to expect when I meet artists that I’ve been following on social media. I’ve been following OG Dutchmaster for a while on Instagram always wondering who he was exactly, but when I sat down with him, his personality oozed out of his words. We met up at Pipe Dreamz, a local clothing store located in Downtown, Baltimore. It was my first time at their new location so I was eager to be interviewing in this space.

Not only is he a dope artist, but he is also a creative that is pushing for change. OG Dutchmaster was very thorough and straightforward in our interview. What I like most about him is how raw he is. It’s a Baltimorean personality staple.

Check out our interview below.

SM: We can start with your name, age, where you’re from. Your stage name is fine.

Dutch: My name is OG Dutchmaster. I’m from Baltimore, Maryland. Eastside, zone 6 sh*t, down the hill, zone 18, all that!

Dutch: Just about everything. I’m a jack of all trades, master of none, you feel me? So, I rap…I do some paintings, some tattoos… a little bit of graffiti here and there. An overall artist, you feel me? I can’t put one claim of fame on me.

SM: So out of all those things you just mentioned, what is your passion?

Dutch: Money, is the real passion. I’m not even going to lie to you on that one. *Laughs* But rap, we’re here for rap.

SM: How did you discover that was one of your passions? Like, what were the determining factors for that?

Dutch: I started rapping when I was a child for real. Even in elementary school, I used to write raps and me and my homegirl would call them Def Jam and shit like that. But publicly, I started rapping in 2012, and I would just put my content out there like every other artist, you feel me? But my shit actually hit, I ended up getting covered by 2DopeBoyz and it’s been smooth sailing ever since. So, shout out to Meka from 2DopeBoyz for the love! Yah! That’s how it got me to where I’m at, ever since then it’s been Dutchy! *Laughs*

SM: Okay! What are some hardships that you’ve experienced as an artist while you were developing yourself?

Dutch: Damn, what hardships haven’t I experienced!? At the end of the day I’m still a person, you know what I’m saying? I actually fight with a lot of mental issues, major depression, and all that shit…losing a whole lot of people continuously just by growing up in Baltimore City can really take a major toll on your spirit as you continue to try to do what you do, you feel me? I’m just as vulnerable as any other person, I’m not Superman or nothing. I don’t really want to get into the hardships though.

Dutch: That shit really hurts the soul. It really does hurt the soul, so I always try to have positive thoughts and positive convos. I don’t want to focus on the bad in life, I’d rather focus on greatness.

SM: Alright. So with the hardships that you did and didn’t mention how are you attempting to overcome those things?

Dutch: Just staying out of the way, you feel me? Trying to take care of my people. I feel like if we all get the bag if I can make everybody around me rich. And if one of us was to fuck up, we can all go to each other and ask for a little bit and it won’t hurt nobody’s pockets and we’ll all be good, you feel me? So that’s the real goal. As long as I can get my family and my loved ones to a better standing, we’ll be able to overcome any hardship or any problem that comes our way.

Dutch: Shit, any way possible! Any time anybody come to me for help, they know they got that shit, you feel me? Even from me throwing events like when I was throwing #NewBaltimore annually, and not even just #NewBaltimore any event that I’ve thrown and I didn’t put myself on the bill, the goal was to put other people’s talents on the forefront, you know what I’m sayin? So just about every artist in Baltimore City, I’ve basically put them on the bill already…I bet that you could probably name three and at least I’m going to have 2 out of 3 that I’ve definitely put onto a bill before. And that shit ain’t going to ever change, as long as I’m alive and as long as I keep on doing what I do the door is always going to be open for everybody that I love and fuck with. So that ain’t going to ever change, that’s just a given when it comes to me if I got it you got it!

Dutch: Me, I’m not afraid to be myself, you feel me? One thing I’ve been getting from a whole lot of A & R’s or PR’s, whatever, everybody always gives me the claim of being different. So, that’s just always been one thing about me, even like growing up before I even started rapping, I’ve always been a different motherfucker. I’m just a unique individual, it’s nothing I ever set out to try to do it just naturally came. I always had that “he’s different” light above me, even from high school to now, know what I mean?

SM: If you could be doing anything else, other than rapping what would it be?

Dutch: I would be cultivating marijuana on an island somewhere. I’m not really materialistic at all so if I could just wake up every day, throw a t-shirt and some shorts on, have some Vitamin D coming from the sun somewhere, you feel me? I just want happiness. That’s the real long-term goal, out of all this shit, everybody just wants to be happy…wants to see their family smile, they want to see the people before them smile and the people after them smile. No matter what, until that shit is actually obtained, I’m always going to be doing something to obtain it. If it wasn’t rapping, I’d still be trying to obtain this happiness.

SM: Who or what are your creative inspirations?

Dutch: Creative inspirations…definitely gotta give it up to Pharrell Williams, you feel me? Because growing up, when I first got suspended for 45 days and shit, in middle school…

Dutch: Yeah.. *laughs* I used to just listen to a lot of Pharrell and Kanye West, so I got to give it up to Kanye West as well. But in today’s time when I’m looking for inspiration and whatnot I like to revert back to old school music, so like Curtis Mayfield, Sam Cooke, and Nina Simone. People in that field that actually was fighting through the music, because even in today’s time we still have to fight so I try to have that same cadence with my music. Even though, it’s like trap or “new school”, you feel me, I still want it to have that same feel or message of ‘we gotta make shit happen!’

SM: To follow up on that question, have you met any of the people that inspire you?

Dutch: Unfortunately, I have not, you feel me? I don’t think I’ve rubbed shoulders with anybody that I am inspired by. One person that I can say that I have rubbed shoulders with that I’m inspired by is Schoolboy Q. One time when I was locked up, I sang his song “Blessed” for like the whole day, and I ended up making bail that night! So it was kind of like amazing, and when I finally got to meet yo, I got to rap with him and we talked about that shit he gave me damn near like a half an ounce of weed and it was beautiful!

SM: What is the most rewarding thing that has happened in your career so far?

Dutch: Another breath. Every day. Another day of freedom…that shit is rewarding in itself, I feel like we got to start looking at the smaller things like that rather than the moments of, “I made this amount of money” or “I performed for this amount of people”. At the end of the day I’m still breathing so there’s nothing that can beat that or anything that can be more monumental than that. Than life.

SM: What do you think you can do a better job at as a creative?

Dutch: I’ve got to take my talents somewhere else, you feel me? Because Baltimore can really halt a person no matter what their craft is, it can actually like slow you down because it’s not a lot of resources here. And the resources that we do have are sometimes very picky, so in order to make my whole little ambiance better, I feel like I have to hit a different state and take Baltimore with me. Baltimore on my back so even if I leave it I’m still here, you feel me?

SM: What do you see yourself doing in the next 5 years?

SM: Okay, last question, tell the people where they can find your work, your social media and everything.

Dutch: You can follow me on IG @OGdutchy_1511, you can find me on twitter @OGDutchMaster, you can find me on Facebook, even though I don’t prefer it at Facebook.com/OGDutchmaster. And on all my social media I got the petition running so make sure y’all sign that petition today to get this HR40 Bill passed, and let’s get our reparations man!

1 thought on “[ The Uncommon Creatives] Interview with OG Dutchmaster”