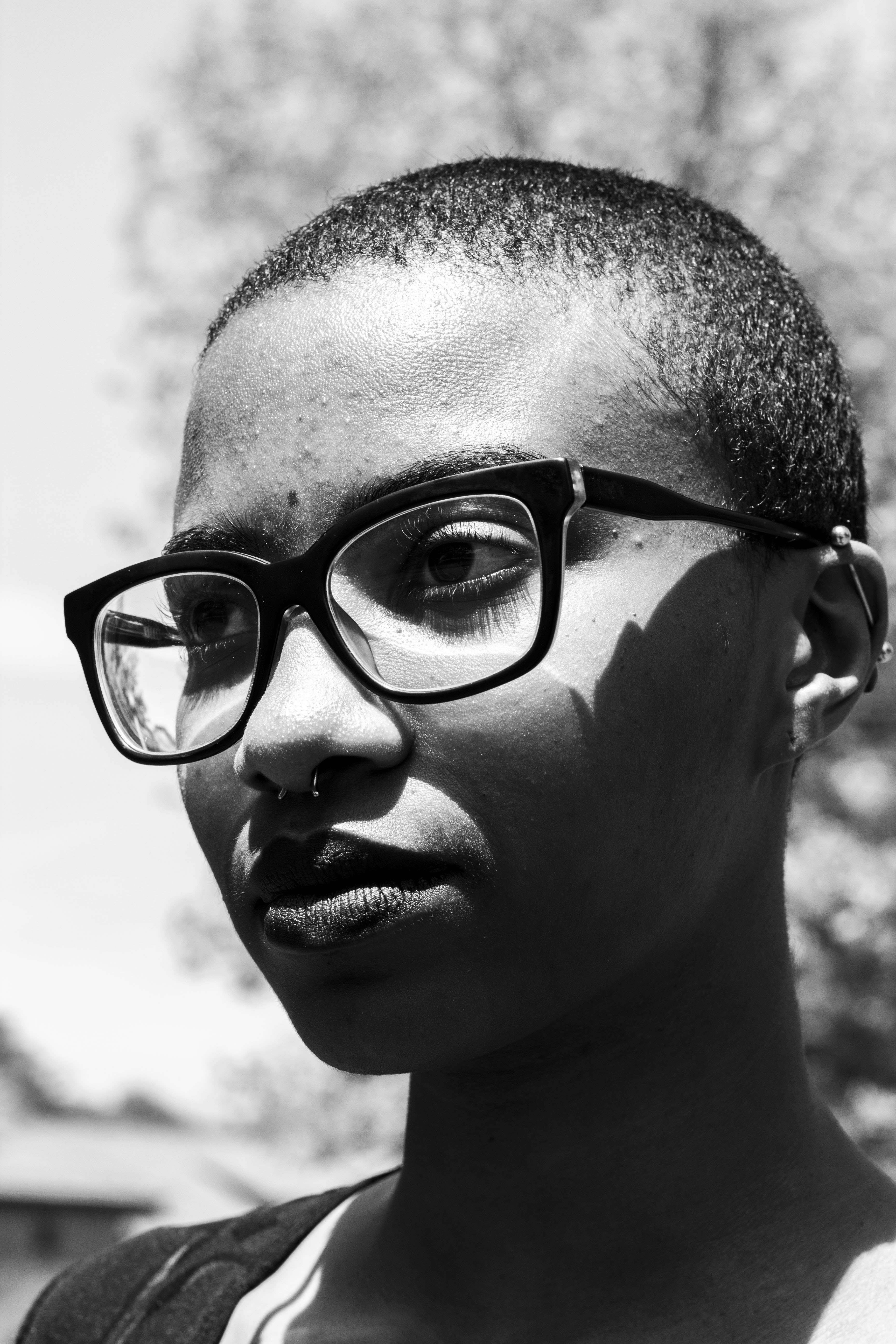 My first time seeing songbird, Bobbi Rush, was at Nubohemia. Nubohemia was a local coffee shop in the Mount Vernon area of Baltimore. It was a couple of years ago on one of the hottest weekends. I was volunteering at Artscape, one of the biggest arts festivals Baltimore hosts every year when I was informed by a friend about an open mic. A friend and I decided to go and check it out. I left the open mic feeling creatively satisfied. Among all of the performances that happened that evening, I was wowed by Bobbi. My homeboy was bluffing on performing during the rap cypher and made a lot of people upset so Bobbi’s voice was like a calming of that storm. I wondered how such a robust voice came from a frame as small as hers.

After that evening, every time I’ve run into her, she has been sweet, soft-spoken, and engaging. The day of this interview, it was a very sunny day. It set the tone for the direction our discussion went. It was a pleasure getting to know her a little more.

SM: You can start with your name, age, and where you’re from.

BR: My name is Bobbi Rush. I am 27 years old. I am from both the east side and west side. I grew up on the Alameda and then moved to Garrison.

BR: Creatively, I sing, I write, I teach, I design, and on the low, take pictures.

SM: Out of all of those things that you do, which one would you say that you’re the most passionate about?

BR: Hmm, the most passionate? Maybe singing and writing.

SM: How did you figure out that was your passion? Like what was the factor that gave you that assurance?

BR: For singing, once I was on the road and always being called. I don’t know, I guess the way that I feel the music and the way that I hear certain chords, I just felt like this is something that I really love. For writing, I started writing a few months after my mother died. And at first it was just something I needed to do to kind of get shit out, but a while I started reading, I was just like, wow this is shaping a voice for me and shaping so many different languages and I just love the flavor of it so I figured this is just one of them.

SM: Since you’ve been, you know, doing all of your creative things, what are some hardships that you’ve experienced so far?

BR: I would say my biggest hardship was my mother dying. In between that, just like your usual heartbreaks and breakups. I think my major one was maybe like a month ago, so I’m kind of just settling back into myself after that whole whirlwind of a change in my life. Yeah, that’s pretty much my biggest thing. I deal with other things in between that, but they aren’t as hard as matters of the heart, to me.

SM: To segue way into the next question, if you did overcome those hardships and obstacles how did you go about that?

BR: I don’t think I’ve overcome them, I think I just deal with them. And how I deal with them? I let them sit with me and I’ll like be sad and mad and angry or I’ll either call that person and fuss and cuss and get it out or write it down. I don’t think you ever get over the loss of a loved one, you just learn how to deal with yourself in it. And then losing or breaking up with a person, after a while you just get over that person. Like you keep certain memories and after a while, it starts to feel okay to keep that person in your memory bank and then you just move along.

BR: For the last two years I started doing classes called “What’s Mine” it’s like a group-think for expressive journal writing and just conversation. So, people show up, I’ll have a few topics that we’ll speak on or like some book quotes that have been helpful to me, and we’ll just kind of speak in between there. And with journal writing, we’ll share that and then we’ll converse on everything that we feel and we’ll find that “this person has that in common with me” and “I have this in common with that person”. It makes just a safe space I’ll say like we will see that we aren’t alone in the shit that we deal with outside of being people. And the things that I design I think bring beauty to people or help them have like a tangible beautiful thing where it’s like, “Wow! I can put this on myself and feel like more of something!” That’s like about the earrings that I make, and women love them! And when they put them on its just looks like wow, they really chose the perfect pair for like their eyes, or their cheekbones or their complexion. And my singing I think it helps the heart of people because singing or music helps the heart of me. I feel like it’s just like a transferring of energy really, so that is how.

SM: Beautifully said! What makes you stand out in your creative field? What is something that people can notice and be like “That’s Bobbi!”?

BR: Hmm. You know I genuinely don’t know that answer. The first thing that came to my mind was maybe how I sign things. I like to write my name with like a certain type of scribble with some lines, but I’m not really sure. I don’t think I have enough people really focusing on my work by itself yet to say okay this is the kind of work she does. But when they look at it they will say Oh, I see that definitely looks like something you would make. I think we’re still in that stage.

SM: If you could do anything else creatively what would it be?

BR: I would be a sculptor. I think a solid photographer. I’d be a modern dancer. Let’s see what else…I think those are my three.

SM: Who or what inspires you?

BR: Who or what? For the what, or the who, I’ll say the who right now: Women. There’s something about women’s body that has been intriguing me for like the last 4 years I would say. Like how it moves, how it looks in or out of clothing. How it smells, although, I’ve never personally been up close to a (woman’s) body to like sniff it. I think if given the chance I’d probably…sniff *laughs*. I think, kind of everything. I look at things just to see what will pop up and try to pull something. It could be a door or the way that the paint on the door is faded or…I can’t really explain. It just depends on where I’m looking.

BR: I’d say small or large details yeah. I’m a very like…I like texture. So I love looking at different things like maybe velvet or wood or rust, anything. And as far as what inspires me, as of late, thinking back to my old childhood, like my old selves. They really inspire me because I’d forgotten about them and so to remember them is like wow, you’ve always been this way or this has always intrigued or interested you, however, you’d word that. People, like D’Angelo I love him. I love you, D’Angelo, wherever you are! Just the way he loves or the way he sings about love is very um…it’s like a sense of manifestation. I like that.

SM: What’s the most rewarding thing that’s happened in your creative career so far?

BR: Being published has been my most rewarding thing so far. I self-publish, but it’s another thing when other companies publish you, that’s been rewarding. First was, Tortilla Girls, they’re like the local scene here, shout out to Melissa. True Laurels, was my second, and Bmore Art, was my third. I did something that was kind of special for me that was on mine, The Blueface Project, it was a write up that I did for D. Watkins. It was supposed to be published through the Baltimore Fishbowl, but something happened where I just really fell in love with D. Watkins’ book, so my review on it was really personal and I thought, I can’t have this edited in someone else’s voice because they don’t understand the feel of what this book means to black people for real, so that was a real accomplishment for me. And I think when people see the work and listen to it and they say wow it’s great, let me have it! That’s always been cool to me, just being able to do the things that I love is really the accomplishment and to take care of myself more and more.

SM: What is something you think you can do better as a creative?

BR: Be more disciplined, I think I could definitely be more disciplined. I guess big myself up a bit more, I tend to be very quiet about all the things that I do. Because I really do a lot, and I think putting myself out there more and not being so shy about everything that’s inside of me that I want to get out is something that I could do a bit more.

SM: Now this is the first time I’ve asked anybody this question, but what is a creative to you?

SM: What do you have coming up? Tell us about it.

BR: Just a few more shows. This weekend I’m doing the Mt. Vernon Flower Fest, me and Troy Long. I’m doing an album release. We’re down at Trade RX, that will be with Mike C, Muva Queen, and a few other different artists. I’m vending at House of Diamonds for this sexual awareness event for Mother’s Day, I’ll be vending my jewelry collection. Really just making more designs. I just put out another line of bags that I designed so just creating more, making sure that the ideas that I have are seen through so that I can just have them done outwardly and not just in my head *Laughs*

SM: Where can everyone find you online?

BR: You can find me on Instagram; @BobbiRushh You can find my work & my writing at www.Bobbiblueface.wordpress.com. Sometimes I’m on Facebook talking shit at Bobbi Rush. A little bit on twitter but never mind that, I’m not really a Twitter-er.

SM: Alright well thank you so much for sitting with me!

BR: Thank YOU for sitting with me!

3 thoughts on “[The Uncommon Creatives] Interview with Bobbi Rush”