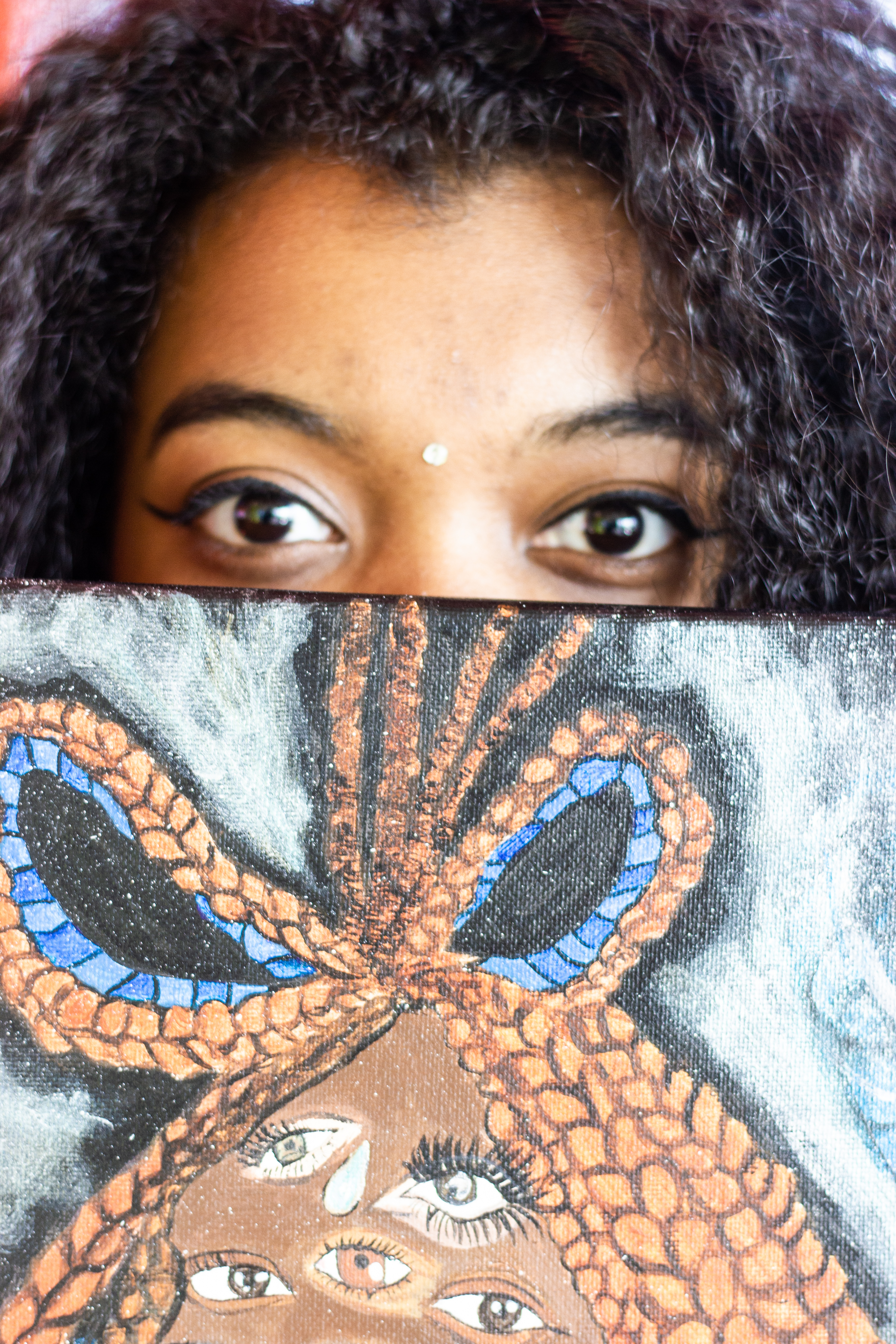 A few months back when I decided to start this series, I really had no clue of who I would talk to, what I was really looking for, or who it would impact. I literally took a leap of faith and further built this series, and developed its purpose with each interview. Here I am at the fourth interview and the purpose is making itself more lucid than before. We tend to embrace creatives for the things that they produce, but do we really take time to talk to these people about their creative processes on a day to day basis? Maryam, and the creatives I have interviewed so far, have told their inspiring stories to let you know that they are just as human as anyone else.

Interview with Maryam and Shae McCoy

S: Alright, so you can start with your name, age, and where you’re from?

M: Maryam, 22, and I was born in California but raised in Baltimore.

S: Okay and what is it that you do creatively?

M: I draw and paint. That’s about it.

S: Is that your passion or do you have other things that you like to do?

S: How did you discover that it was your passion and what were the determining factors? Like, what was the thing that made you say ‘this is what I wanna do for a long time?’

M: I started drawing when I first moved to Baltimore. So around five or six years ago. It was just drawing and the basic art classes in elementary school. But, I started painting a year ago. Before that, there were moments where, you know, certain people would say something and it would cause me to not really wanna do it anymore. Once I realized that I was good at painting and I started getting good outcomes from other people, I don’t know if that’s the right word to use, then I realized that maybe this is the gift.

S: Alright, so that segue’s into the next question, what are some of the hardships that you’ve experienced as a creative and how did they help you to develop into the person that you are now?

S: You haven’t had any moments of doubt?

M: Yeah, at every art show that I go to and I’ve only had two art shows. But it’s the competition thing or you see other people do something that’s better that what you do. So basically I’ll just sit at home and watch videos and try to get better at things that I’m not really good at because  I’m self taught.

S: Okay, so that’s another segue into the next question. I was gonna ask how did you overcome those hardships? Improvement is always a good way to overcome things. Do you have anything to say about that?

M: I notice that each painting that I do is better than the last one. So, I learn from the mistakes that I make. My shading and everything gets better over time.

S: How do you help others with your craft?

S: Anything. Like how has your craft helped people? Somebody might have bought a painting and was like ‘oh my god, I needed this. This is therapeutic’ or something like that. Or even if you helped out or donated work somewhere, anything like that?

M: Well someone did say that one my waterfall paintings were therapeutic to look at but they didn’t buy it.

S: Is that something that happens a lot?

M: I don’t know. I always hear ‘wow that’s beautiful’ or ‘you’re so great’ and stuff like that.

M: I asked my friend this question last night actually, so I’d know (laughs). I was told that I add a lot of galaxy in there and there’s always a Saturn involved because my energy is more towards Saturn. It’s one of my ruler planets as an Aquarius. I have that in there and I really like eyeballs. Now that I’ve been more spiritual, there’s now a third eye added into more of my drawings. So, I guess that can be something. I haven’t been out there that long.

S: If you could do anything else other than painting and drawing, what would it be?

M: I’ve always wanted to be a flight attendant. I love airplanes.

M: Yeah, that’s who I wanted to work for but I can’t get into it. There’s a reason but I don’t wanna say.

S: It’s okay. It’s all good. Who or what are your creative inspirations?

M: Saying Bob Ross would be really cliché, wouldn’t it?

M: (laughs).The person who did get me really into painting, just by looking at one of her paintings, is the tattoo artist (@shes_uneq).

S: She did this (shows tattoo).

M: She did my back piece (laughs). And she’s doing mine in like two weeks, my elephant. I told her that she inspired me.

S: That’s dope. Yeah she’s really lit. Of course, the next question is, have you met any of them, but you’ve met her because she did your tattoo. Um, what is the most rewarding thing that has happened to you in your career so far?

S: What were they?

M: Baltimore Soundstage was the first one. That was with Raw Artists. And the second one was with, I think that’s how we met, it was with Jamil and???

M: And this (laughs). I never thought that I would be interviewed a year ago when I started painting.

S: Super cool. Alright, this might be a little personal…well it’s not that personal, but what do you think you can do a better job at as a creative?

S: As a painter or just as a creative person period.

M: Learn how to take criticism. Listening and trying to expand my work. To just keep doing it. I tend to procrastinate a lot and it’s hard to balance work and doing art. I should start doing more art to get back into it because it’s hard to get back into it after not doing it for some weeks. Basically, I need to not procrastinate as much, especially when I’m doing a clients work.

S: What do you see yourself doing in the next five years?

M:  (laughs) I’ve never thought of that, no. And I don’t understand how to collaborate with art.

S: Apparel is probably something you could do since you draw to. You could always sketch up designs and stuff for people and things like that.

S: I feel like everyone does that now. I’m tired of seeing painted ass. (laughs)

M: (laughs) It doesn’t last. Once you take a shower, it’s gone. So, I don’t know about that. But houses, that would be cool. I was in an Uber ride and I mentioned that I was a painter. She looked at the cartoons. I don’t really like doing cartoons all the time because I’m more creative than just copying some other artist…Nickelodeon, Cartoon Network. But she said something about me painting her daycare. That would be cool.

S: Whoa! Alright, so last question, where can we find your work? And how can we keep up with what you’re doing?

M: I’m currently on Instagram but I’m trying to find a good website. I don’t know which one to do yet, but eventually that will be up to. My Instagram is @aquanics.

S: Thank you for coming and talking to me!

2 thoughts on “[The Uncommon Creatives] Interview with painter/illustrator, Maryam”